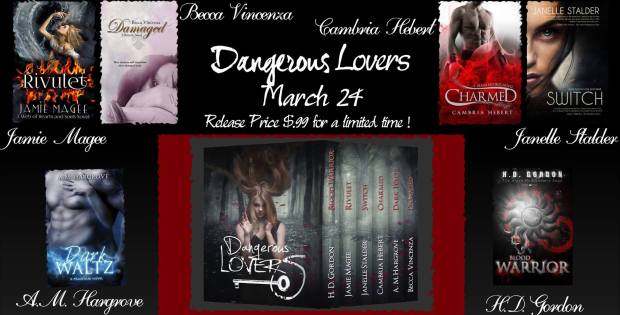 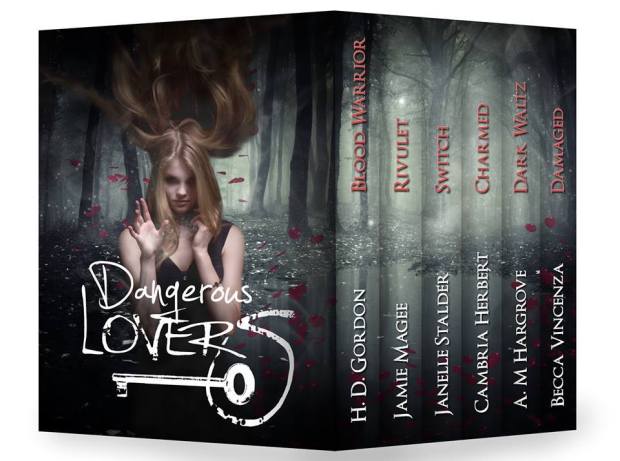 Six sizzling tales of adventure, love, and falling for the wrong one. 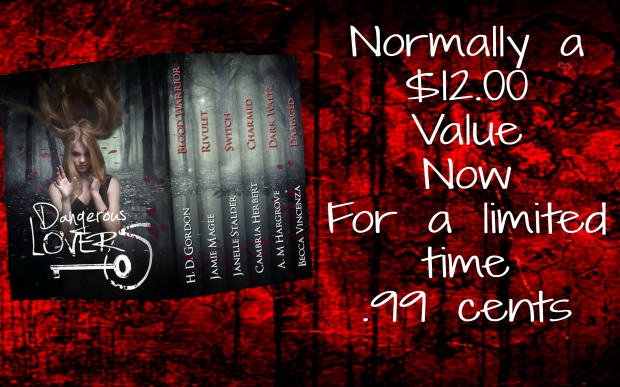 When her home is attacked by murderous vampires, 17-year-old Alexa is forced to leave her mother for dead in order to save her sister. She soon learns that she is the last known member of an elite race of supernatural Warriors, and is thrust into a world full of vampires and werewolves who all seem to regard her as some sort of savior. Meanwhile, Alexa battles a monster within herself that seeks to gain control; a monster that seeks blood.

The hidden city she finds herself in appears perfect, but Alexa’s instincts tell her that all is not right within its walls. When she is asked to attend a school of fighters, whose exams consist of gladiator-style competitions, she must decide who she can trust among the smiling faces. And, when she meets Kayden, a vampire she feels undeniably drawn to, she must decide if she can trust herself.

H. D. Gordon is the author of The Alexa Montgomery Saga. Blood Warrior, the first book of the Alexa series was her debut novel and has held a spot in the top 100 fantasy bestsellers for over a month. Half Black Soul is the second book in this series and H. D. plans to complete Alexa’s tales by the end of 2012. In June of 2012, Joe, a fantasy novel about a young clairvoyant, was released as well. H. D. is a lifelong reader and writer, a true lover of words. When she is not reading or writing she is raising her two daughters, playing a little guitar, and spending time with her family. She is twenty three years old and lives in the northeastern United States.

Unfathomable forces have always contested Genevieve Indiana Falcon, known as Indie. The curse of her cold touch entraps her just as the grief ignited in her past torments her. Yet, her mysterious ability to dream while awake saturates her in the belief that she was not always anguished. There is hope that one day a true peace in her soul can be found.

Foolishly, Indie assumes she has contained her life in an odd balance, and she cherishes the visions she sees of the enigmatic boy that held her in a lost time, but can never reach. She grieves for a life she fears she’ll never possess, and that grief is a weapon she uses against her aunt who stands between her and her inheritance.

Weeks away from her twenty-first birthday, the date where she would assume control over her family legacy, a night terror robs Indie of the balance she was clinging to. Like the dream she had before she lost her family, it predicts a fatal catastrophe on the horizon. The fight between life and death, good and evil, began the moment her thundering heart awoke her.

Everything changed after that dream. The one thing that keeps her curse at bay is stolen, and then the enigmatic boy arrives in the flesh. Face to face with her fiery born-again lover Indie realizes that the only way she can prevent the tragedy before her is to surrender everything she was, is, and could be.

Can she bend the laws of nature and fight the improbability that fire and ice could ever be one? As far as Indie is concerned, there is not a myth, spoken fate, or curse that is stronger than her stubborn desire to have it all … including him.

The Rivulet series can be read on its own or as #11 in the Web of Hearts and Souls Series.

Jamie Magee has always believed that each of us have a defining gift that sets us apart from the rest of the world, she has always envied those who have known from their first breath what their gift was. Not knowing hers, she began a career in the fast paced world of business. Raising a young family, and competing to rise higher in that field would drive some to the point of insanity, but she always found a moment of escape in a passing daydream. Her imagination would take her to places she’d never been, introduce her to people she’s never known. Insight, her debuting novel, is a result of that powerful imagination. Today, she is grateful that not knowing what defined her, led her on a path of discovery that would always be a part of her. 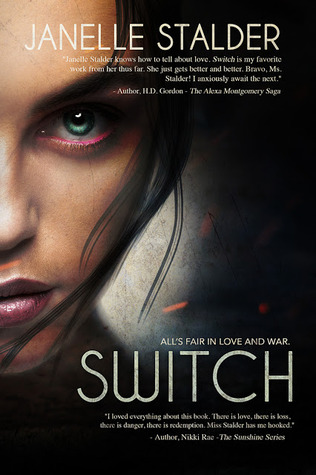 All’s fair in love and war.

Two thirds of the world’s population has been wiped out, devastated by the worst war earth has ever seen. Still standing amongst the ruins is a mind reader who finds herself on the wrong side of the war. Everyone does what they must to survive. When the rebels bent on bringing down the New World leader start to rise up, it is her job to make sure they stay down where they belong. That is, until one rebel sneaks past her defences and into her heart. Love will blossom from the ashes, but will it be enough to save them, or will it mean the end of them both?

*This book is for mature audiences due to sexual situations, violence and strong language. NA

I am an author of YA novels, as well as, and most importantly, a mother to my two beautiful children! 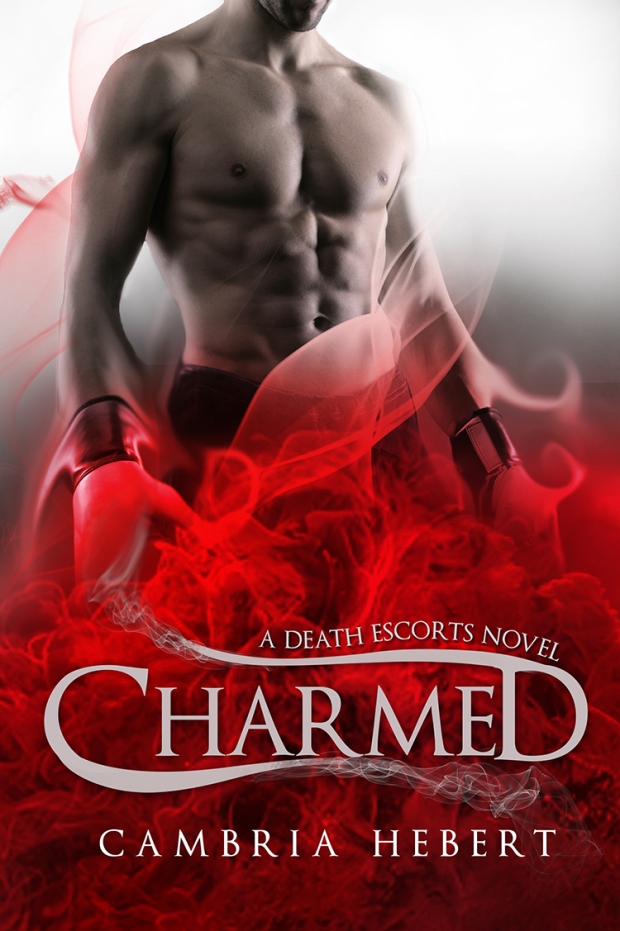 Life or Death? Not many people would choose death. But what if death chooses you? What if death doesn’t mean the end of your life, but the beginning?

And Charming is the best Escort the Grim Reaper has ever had.

But when you piss off the Reaper, being the best doesn’t matter. So Charming is assigned a Target who is practically impossible to kill. He knows the Reaper hopes he fails—that he’s counting on it. So Charming vows to prove him wrong. He vows to make the kill.

But someone else vows to get in his way. Someone with a big mouth, a sugar habit, and blond hair. Someone who makes his heart start beating again.

And so Charming is left holding more than one person’s fate in the palm of his hand. He thought the choice would be easy, that there really wasn’t a question at all.

Cambria Hebert is a latte sipping author of the Heven & Hell series, the Death Escorts series, and the Take It Off series. She loves a caramel latte, hates math and is afraid of chickens (yes, chickens). She went to college for a bachelor’s degree, couldn’t pick a major and ended up with a degree in cosmetology. So rest assured her characters will always have good hair. She currently lives in North Carolina with her husband and children (both human and furry) where she is plotting her next book. You can find out more about Cambria and her work by visiting http://www.cambriahebert.com

Attention: This is an ADULT Book!

It’s the year 2030 and the human population has been annihilated by a virulent form of small pox. Liasare Davidson is desperately searching for her brother, who has been missing for three months. It’s been eighteen years since she was evacuated from Earth and she is horrified to see it’s become a cesspool of unimaginable things.

In her quest to find her brother, she meets Jurek, a powerful and enigmatic being that frightens her, yet she is unable to resist. When things begin to unfold between them, they both discover a paralyzing truth that puts Liasare at grave risk. She must make a choice to join Jurek and find her brother or fulfill a role she believes she is ill equipped to undertake.

One day, on her way home from work as a sales manager, A. M. Hargrove, realized her life was on fast forward and if she didn’t do something soon, it would quickly be too late to write that work of fiction she had been dreaming of her whole life. So, she rolled down the passenger window of her fabulous (not) company car and tossed out her leather briefcase. Luckily, the pedestrian in the direct line of fire was a dodge ball pro and had über quick reflexes enabling him to avoid getting bashed in the head. Feeling a tad guilty about the near miss, A. M. made a speedy turn down a deserted side street before tossing her crummy, outdated piece-of-you-know-what lap top out the window. She breathed a liberating sigh of relief, picked up her cell phone, called her boss and quit her job. Grinning, she made another call to her hubs and told him of her new adventure (after making sure his heart was beating properly again).

Other than being in love with being in love, she loves chocolate, ice cream and coffee and is positive they should be added as part of the USDA food groups.

(If you’re wondering, it didn’t happen EXACTLY that way, but….)

There are some beings in this world, long thought to be extinct. Some seek to protect them, others want control, but some . . . some are hell bent on their destruction.

Audrey was taken from her father, hidden away from the world, and tortured for five years. She was rescued, but is she really safe, or is there someone else waiting to betray her? Can she trust those who saved her? Can she learn to accept who she really is?

Stone was on a routine mission to extract valuable information from a rival clan of paranormals. Instead, he and his team find something much more valuable: a scarred, damaged young woman who holds many secrets, and whose power is beyond anything they could ever have imagined.There is much more to Audrey than meets the eye and Stone is determined to protect her.

Audrey and Stone are about to find out it’s hard to know who to trust.

Oh jeez…do you know how many people I told I didn’t want to write this? So here is the one my friend made me:

Becca Vincenza lives in wonderful Michigan. She has a love for Skittles, rainbows, Star Wars, *giggles* and Hot Men. She spends time in her basement with Airicka… Apparently that’s where the best ideas come from.

Any who….she loves meeting new people, so feel free to message her on Facebook and friend her on Goodreads!

Although her phone number will not be given out because, well…she doesn’t like heavy breathing.

So a sort of serious one: For real, I am a geek. I grew up watching Star Wars, and my father read Lord of the Rings to us, along with the C. S. Lewis series. I love to write. In all honesty, it took me a lot of work to get where I am today and I don’t regret a moment of it. Reading and writing are honestly the best things ever. I couldn’t be happier that my parents put me through so much extra help. Anyways! Me, me, me…. Huh…I love paranormal stuff…Love it.